Lakes – unlike last year the weather during most of the opening week was excellent for fishing, overcast with a gentle breeze. A total of 174 trout were caught which is a record start to the season. Members visited the lakes on 81 occasions, 136 fish were returned.

Little Springs was the most productive lake including two fish of 3lb 8ozs and an over wintered fish of 4lb 8ozs. Upper Figgs produced trout of 3lb 8ozs and 5+lbs, both of which were returned.  Two wild fish were caught at Little Bognor. A high pressure system over the country this week will see warm settled weather which should encourage further hatches of grannom and midges.

River – the river is in excellent condition and opens on Wednesday 3 April. 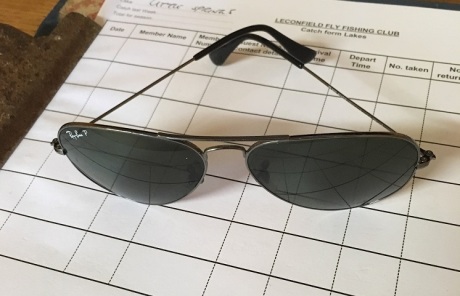 Lost property – these Ray Ban sunglasses are on the top of the stuffed fish in the club house for the owner to claim.