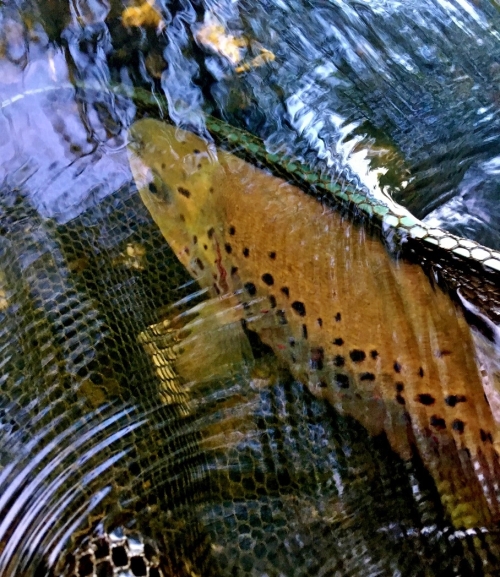 Catch and release provides members with very flexible fishing. Members have the option of keeping brown or rainbow trout for dinner or the pleasure of seeing a fish swim away from the landing net. 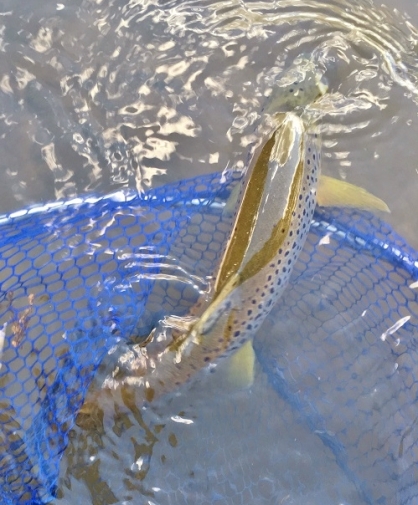 When fishing the river barbless or de-barbed hooks are compulsory in order to protect the wild brown trout, sea trout smolts and returning adult sea trout.

The spring fed lakes at Little Bognor and the river are suited to catch and release as they are cool throughout the summer. However, catch and release will be suspended if there are fish deaths due to high water temperature or poor fish handling.

Occasionally the fish become difficult to catch but regular stocking will ensure that there are always fresh fish available.

None of the rainbow lakes are spring fed to the same extent as Little Bognor. The water temperature at the bottom of Great Springs reached 25 degrees at the height of last summer. Catch and release throughout the season is therefore not an option on the rainbow lakes. Catch and release will be allowed on the rainbow lakes only at the start of the season and again at the end of the season if the conditions are right. The dates will be circulated to members by email and on the website. Notices will also be displayed in the fishing huts. The flies on sale at Great Springs will be barbless.

After hooking a trout play it out quickly and use a landing net with a fine knotless mesh. If possible do not touch the fish, barbless hooks normally drop out once the line is slack. If necessary, use forceps to remove hooks.

If you must handle the fish, use wet hands. Release it from the landing net. That will enable you to nurse the fish until it can maintain an upright position and swim out of the net unaided. It might take a few minutes for the fish to fully recover. Do not return exhausted or bleeding fish, they may swim away but will die later.

Use a landing net with a long handle so that you can easily reach the water. A pan shaped net prevents the fish from tangling in the mesh, to remain upright and to swim away over the rim of the net.

Don’t take a photo of a trout if you intend to return it. It should be released without delay.

The Wild Trout Trust gives advice on catch and release . . .