Rother sea trout and those in the River Ouse, have a very distinctive appearance. They are generally deep bodied, heavily spotted fish. They show exceptionally fast growth. The Sussex rivers produce, on average, the largest sea trout in England and Wales. Most sea trout are female. These large old sea trout produce thousands of eggs and are the most important fish to return. 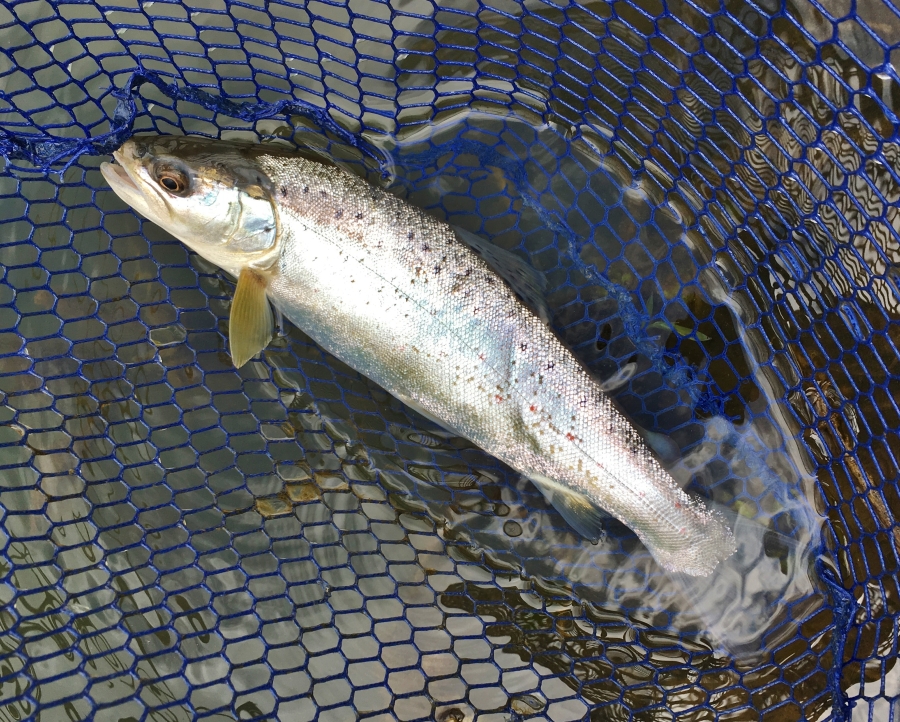 A sea trout smolt caught in May

A proportion of young trout are driven to migrate to the sea by a lack of food in the river. The young trout turn silver and change their physiology so that they can survive in salt water. These smolts shoal together and migrate to sea from March to May usually at night. The sea is rich in food and the trout rapidly increase in size. During the day migrating smolts may splash about on the surface, they can look like a shoal of dace or roach.

Mature fish arrive in the summer and early autumn. They usually travel at night when the water level is high. During the day they wait in deep pools with good tree cover. The majority of sea trout entering the Rother are large fish which have spent a year or more at sea. They are usually in the 4-6lb class and are bright silver with black spots. After a few weeks in the river the silver fades to a pewter or lead colour with a purple sheen.

Mature sea trout remain in the estuary waiting for rain. High water levels provide better travelling conditions for the fish and encourage them to swim upstream. Adult sea trout are powerful jumpers and can clear a yard high weir. On the River Arun and the River Rother, barriers to their migration have been modified or removed by the Environment Agency working in partnership with the Arun and Rother Rivers Trust.

Sea trout breed when water temperatures are low during October and November but late arriving fish may spawn until mid-February. They spawn in the main river on gravel riffles and also in side streams. The side streams are very small and many can only be reached when water levels are high.

A sea trout kelt from one of the new riffles

Once spawning is completed the fish quickly return to the sea. Sea trout are stressed during spawning and might show white or reddish fungal growths. If the infection is not too serious, the fish will return to sea and recover. Therefore sea trout kelts that have minor fungal infections should not be killed.

The club is fortunate to have a good number of wild brown trout and sea trout in the River Rother and is working hard to restore their environment. Members targeting sea trout must have a salmon and sea trout licence.

The club rules have been changed this season to permit only the use of barbless hooks on the river. All sea trout and wild trout must be returned.