This season the option to catch and release stocked trout will be permitted on both lakes at Little Bognor. During the trial barbless hooks must be used. The trial gives members the option to take or release stocked fish. Any wild trout, which usually weigh less than 1lb, should continue to be returned to the lakes. The lakes at Little Bognor are spring fed and the lower summer water temperatures allow the trout to be released with a good chance of survival.

Catch and release enables members to return fish that are not wanted for the table. The advantages are that members may catch more fish and some returned trout might over-winter. However, there are disadvantages. With repeated catches the trout become educated and more difficult to catch. It should be an interesting season at Little Bognor.

Studies on rod caught salmonids, using radio tracking devices, show that 100% survival is possible with very careful handling. However, there is 100% mortality of deeply hooked or bleeding fish. If a trout is deeply hooked or bleeding badly from the gills or throat, please do not return it. If possible unhook trout while they are in the landing net and allow them to recover in the net before they are released. It might take 5-10 minutes before a fish has recovered sufficiently for it to swim away. If a fish cannot hold itself upright in the landing net, it will sink to the bottom of the lake and die.

The trial will be monitored during the season and if there are fish fatalities or the water temperature is too high, the trial may be stopped. Returned fish will not be added to your fish account. Catch and release is not permitted on the other lakes.

Barbless hooks are mandatory on the River Rother so that the wild trout and sea trout can be returned to survive and spawn. Barbless hooks or squashed barbs, ensure that trout are not damaged in the landing net or while being unhooked and that the fish can be quickly returned to the water. Barbless hooks, for nymphs and dry flies, are generally finer in the wire because a barb does not have to be cut into the metal. They are also sharper. As a result they tend to penetrate and hold a trout better than a barbed hook. 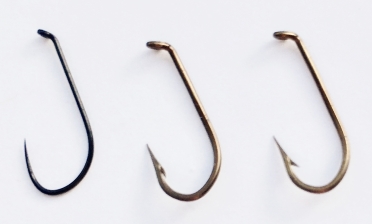 A barbless hook tends to drop out of the trout as soon as the fish is in the landing net. The hook does not become snagged in the mesh as the fish struggles and often the net can be lowered and the fish allowed to swim away without it being handled. That greatly increases its chances of survival. A pan-shaped, knotless landing net with a fine mesh gives the fish room to recover and swim away without any damage to it’s fins.

Use pliers or forceps to squash the barb down after tying the fly to the tippet. Barbless hooks and flies can be bought online, most specialist fly fishing suppliers stock a good selection.

Fly Culture magazine winter edition, it’s about ‘Why’ we fly fish, no adverts, no product placement, 100 pages of content. Great Christmas present 🎁
Beautiful Autumn evening
So much rain, the gnomes are flooded out :-(
My favourite seat 👍😊
Beautiful autumn rainbow 🌈
%d bloggers like this: