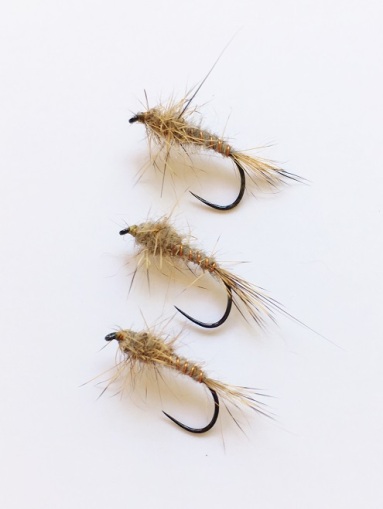 This fly has a long history. In 1886 Frederic M. Halford published ‘Floating Flies and How to Dress Them’. He included the Gold Ribbed Hare’s Ear, a dry fly. In 1910 G. E. M. Skues listed the Hare’s Ear pattern as a wet fly in his classic ‘Minor Tactics of the Chalk Stream‘. The history of this pattern therefore neatly tracks the Skues – Halford debate.

According to the catch returns this traditional pattern accounted for a high proportion of the trout caught on the club’s lakes and the river for the last three seasons. It is a good general representation of a variety of nymphs. A size 10 is a good imitation of a mayfly nymph and a size 14 can represent an olive or stonefly. It is a fly that will catch trout throughout the season. 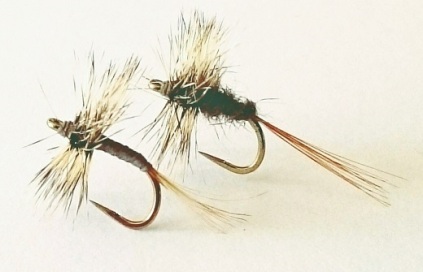 This is a traditional fly that was invented in 1922 in the USA by Leonard Halladay for his friend Charles F Adams.  The pattern has since been modified to the extent that any small, grey dry fly is referred to as an ‘Adams’. It can also be tied with slips of feather for the wings or as a parachute fly.

This pattern is a good general representation of adult midges and can be very effective in the evening when other flies have been rejected by the trout. Midges hatch throughout the year and a size 14 Adams is a consistent fly from March to November.

These traditional patterns should be in every member’s fly box.